Catherine, as portrayed on this show, is a big-hearted woman with big plans for Russia.  Peter is a shallow, inconsiderate man who just wants to gain his power back.

Episodes like this suggest there may be more going on.

The problem for Catherine is she really wants to change Russia now, and Russia is very resistant to change.  Challenged by some school girls, Catherine wants to free the serfs.  Orlo says they need to take this slow, that it’s a major change to their economy, and it won’t be easy.  To prove otherwise, Catherine decides to take Marial’s maid, an old woman named Shakey, and have her pose as a noblewoman at a big dinner.  It actually seems to work.  A number of the nobles are rather taken by Shakey, even as Aunt Elizabeth notes she was also a wetnurse to, like, half of them.  One woman finds Shakey very nice, and a man makes out with her.

So, naturally, Catherine tells everyone who Shakey really is to prove the serfs are just as capable as the nobles.  That…does not go over well.

Naturally, Peter’s allies get their hands on Orlo’s plan to free the serfs, and Catherine’s explanations that, yes, the serfs would need to be paid a fair wage and everything, a thing that could actually get these nobles even more of a profit, just doesn’t sit right with these people who don’t want to do something like treat serfs like human beings.  Peter, seeing an opening, opts to ferment a rebellion in the morning and then capture Catherine in the chaos.  She is still pregnant with his child after all.

All of this could have been avoided if the two hadn’t had a spat while he was giving her a good tongue lashing in the most lascivious manner of that terminology.

But, funny thing:  the nobles have other problems.  Apparently, when there are serfs, like, everywhere, they tend to overhear things.  Like, everyone’s plans.  So, sure, that noblewoman who was having a friendly chat with Shakey decides to do something about it.  She finds the old woman in her new room and orders her own maid to kill Shakey.  Said maid declines.  The noblewoman slits Shakey’s throat herself.

But then something unexpected happens:  the serfs go on strike.  Oh, and then they rebel.  Catherine’s only real option is to let Velementov put down the revolt and side with the nobles.  She doesn’t want to.  She really doesn’t.  But it’s her only option, and she breaks down crying.

That would be when Peter finds her and instead of taking her hostage, he holds her.  His heart went out to his wife, and he was able to offer her comfort.  Then he went back to his room and had himself locked in.  He grew a conscience or something.

Marial, meanwhile, put a bullet in the head of the noble who killed Shakey.  Apparently, going from noble to servant and back to noble can change a person’s priorities.  And somehow, I don’t think anyone will mind. 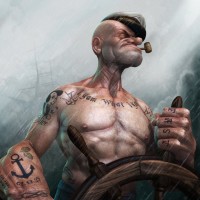