Nick Fury's occasional love interest has a habit of joining all kinds of covert groups, not all of them friendly.

So, funny thing.  I was going to use this space to cover Battlestar given the character appeared in a few episodes of The Falcon and the Winter Soldier when into the penultimate episode, in walked Julia Louis-Dreyfus as Contessa Valentina Allegra de Fontaine, a name that is rather long so I will not be typing the whole thing out again.  Anyway, over in the Gabbing Geek office, Ryan referred to her as Madame Hydra.  I said she was a longtime SHIELD agent and love interest for Nick Fury.  Then I double checked and learned we were both right.

That seems like a good enough reason to cover the Contessa this week.

The Contessa started off as a member of the Italian jet set when an unspecified resistance group did something to kill her parents.  After being rather directionless for a while, she ended up joining SHIELD and really impressing Nick Fury during her trainee period, mostly by flipping him over her shoulder during a judo lesson.

He had apparently said something derogatory about female agents before that.

Anyway, the Contessa went on to become a high ranking member of SHIELD and Nick Fury’s longtime love interest.  This is, no doubt, the version played by Melrose Place actress Lisa Rinna in that made-for-TV Nick Fury movie with David Hasselhoff.

So, that was more or less what I knew about the Contessa, but then came the other stuff later that Ryan knew about.  See, at some point there was the Secret Warriors series.  That series, by writer Jonathan Hickman, had Fury working against HAMMER, the Norman Osborne-run version of SHIELD, and HYDRA, which had secretly been running SHIELD for years.  The Contessa had somewhere along the line become Madame Hydra, but also she was part of a Soviet-bloc intelligence group called Leviathan.  Fury learns of all this and gets into a variety of scrapes that may or may not end with the Contessa still as Madame Hydra.

Given how much I enjoy Hickman’s work, I really should go back and read Secret Warriors.

So, which version of this character is Julia Louis-Dreyfus playing?  Is this the SHIELD agent?  The Hydra leader?

As I type this, I don’t know.  But the actress does look rather fabulous, so I am glad to find out…whenever that is. 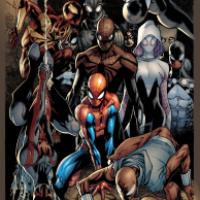