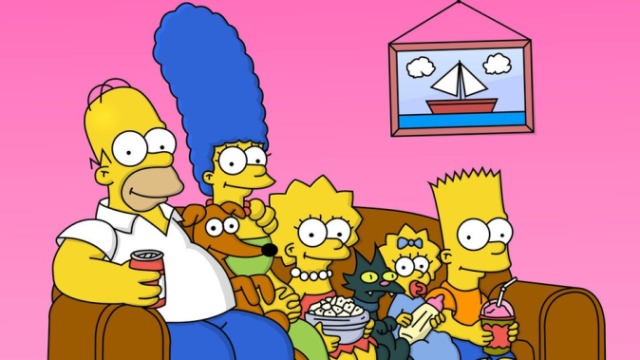 So, here I am, watching the next Simpsons episode, wondering what Jimmy is doing with his moose, when it occurs to me that this particular episode shows Homer wearing his assassins sneakers, and Lisa looking like she did when she had the mumps, both of which occurred in an earlier episode.  Plus, when Homer hits Lisa with a hairdryer, she sure does look like Bart getting similar treatment.  They’re recycling footage, and obviously so!

I sure hope someone got fired for that blunder!

Why does Homer Simpson have so many issues involving the women in his life?  Any episode that pairs Homer with Marge or Lisa is about how much he needs to work on the relationship he has with whichever one he’s paired with.  It gets old after a while.

But hey, here we are.  Homer screwed up getting a reed for Lisa’s saxophone before the school talent show, so in order to get back in the middle child’s good graces, Homer buys her the pony she always wanted.

Homer should have listened to Marge and not gone for the quick fix.  Then he wouldn’t need to take out a loan directly from Mr. Burns and Smithers.  Plus, Marge believed that Homer’s plans for the horse were illegal, though to be fair, Homer may be right about that being for the courts to decide.

This is one of those episodes where we see just how much the family’s low finances are actually remembered to be a thing.  Horses are expensive, and Homer has to take a second job, working for Apu at the Kwik-E-Mart.  Apu personally takes this very well, since it means one of them now works for him.

But you know how good Apu has it?  He’s dating Princess Cashmir, the exotic dancer.

Lisa is often portrayed as the smartest person in Springfield.  She’s often wise beyond her years, and a lot more mature than an 8 year old could reasonably hope to be.  So, it does help to get a reminder once in a while how much of a kid she is, and little girls want ponies without realizing the cost.

Lisa herself makes note of this, that wanting to be treated like an adult means making adult decisions, like giving up the pony so a thoroughly exhausted Homer can not kill himself.  That’s sweet.  Homer quits the Kwik-E-Mart.  The trips to that wonderful Slumberland just weren’t worth it since in reality it meant Homer was lucky to get home alive.

That’s actually too bad.  Homer’s not good at much, and though he slept, stole, and was rude to the customers, Apu notes he was the best damn employee any convenience store could have.