Way back in the middle of July I reviewed Civil War #1.  Six months and 4 issues later I’ll finally look at Civil War #2-5 after the break.  The series was a bit of a mixed bag starting off but unlike many of the Secret Wars series, really finished strong.  It is currently ranked 12th in our nearly completed Secret Wars Power Rankings.

Marriam Sharpe is dead.  Tony Stark is using a drone to follow the trail or her killer and it leads right into the heart of Captain America’s territory.  Cap ally Storm doesn’t take kindly to the intrusion and destroys the drone.

Stark takes the information that the drone did collect and feeds it into his Stark-tomatron 3000 and it produces this:

From which Tony is able to deduce that “We’re being played.”

Meanwhile in the lab of Hank McCoy over in Cap’s Blue territory, McCoy demonstrates on the fugitive Sandman the success of Project Bellcurve, which removes Sandman’s powers.  There is only one problem with their new weapon, it needs resources that are only available in The Iron.  Of course.  So Peter Parker volunteers to lead a team to infiltrate The Iron and get what they need.  A mission which does not start off well as they are immediately detected and Elektra is killed.

While Cap is attempting to build a weapon to destroy super powers and end the war, Iron Man is using a more subtle approach as he believes there is more going on here than meets the eye.  He sends She-Hulk undercover in her civilian identity to The Blue to look for answers.  He arranges all the proper credentials for her to enter Steeltown, but will it make any difference when Professor X arrives at the gate to scan her mind to determine if she is a threat?

With Elektra’s death, the remaining members of Peter Parker’s team are in tough against Stark’s Iron Sentinels.  Parker, a new Black Panther (the original Black Panther’s son) and Venom destroy one of the Sentinels and then make a run for the inside figuring the Sentinels are external defense only and won’t attack their own base.  And by golly they’re right!  They battle more robots inside and Peter informs his team that if they kill the thing running the place the attacks will stop.  That thing being a grotesque amalgamation of a dead Kingpin with Doc Ock’s arms.  And kill it they do as Venom (who is on Hawkeye for some reason) shoots the baton of the deceased Elektra’s (passed down from a deceased Daredevil) straight through his brain.  They get the resources they came for and get the hell out of there.

In The Blue, She-Hulk has managed to get past Xavier’s brain scan.  A combination of her lawyerly brain believing what it needs to believe…and probably more so that Xavier is not at full strength for some reason.  She-Hulk gains entrance to Steeltown and continues looking for Mariam Sharpe’s killer, who appears to be Bullseye.  Before She-Hulk can confront him though the Punishers have ID’d her and have arrived to arrest her.  She runs, but is captured.  Not by the Punishers but by the long believed dead former Black Panther T’Challa.

In getting captured She-Hulk has learned the truth, that it was T’Challa that sent Bullseye to kill Miriam Sharpe.  But now she has no way to get that information back to Tony Stark, or Captain America for that matter.  He also admits to being the driving force that stepped in from time to time to ensure the war continued.  When asked why he would do that, he says that he did it for his people.  Wakanda has been destroyed (which he oddly says he doesn’t care about), but he will have a new home for his people.

She-Hulk wants to know what he wants with her and he says that it is not her that he wants.  He is just using her as bait.  Which works to perfection as Tony follows her signal to the bowels of The Divide and when attempting to rescue her is also captured.

With Stark captured, T’Challa reveals his master plan to allow the war to decimate both sides and then to rise up and take over whatever is left.  For his people.  For…and here’s where Ryan was bouncing off the office walls for a week…the Skrulls!  You see, not only is this a Civil War zone, but it is also the GD SECRET INVASION zone!  (Which answers a huge question of why that very popular storyline never had a zone to begin with on Battleworld.)

Meanwhile, above, war has erupted between The Iron and The Blue at The Divide.  Cap has brought the Project Bellcurve weapon with him and he plans to use it to put an end to the war.  But for the plan to work, they need The Iron’s most powerful members to converge all in one spot.  How are they going to arrange that?  Cap drives the weapon out into the middle of a clearing, stands on top of it and yells, “You want me?  Here I am!” 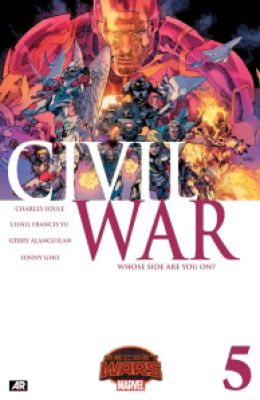 Tony and She-Hulk know the truth.  It was those dirty old Skrulls behind the ongoing war that is coming to a conclusion above as Captain America prepares his weapon to wipe out the super powers of the mightiest combatants from The Iron.  But stuck deep down in The Divide and having his signals dampened by their surrounds, Tony hasn’t been able to call for a new suit of armor to get them out of there and tell everyone of the deceit.  That is until She-Hulk tears a whole in the complex to give them an escape route.

Cap is ordering his men to fall back so that they won’t be caught in the blast radius of Project Bellcurve, thus retaining their powers and giving The Blue the advantage in the war.  During this time Tony has managed to contact a new suit of armor and it arrives in time for him to join yet another Iron Man vs Cap throw down.  But while Cap is doing his best to hand Tony his iron ass, Tony is trying to tell Cap what happened below and the past six years with the Skrulls.

Tony knocks Cap down and while Cap catches his breath Bucky Barnes and Emma Frost join Tony.  If you thought it was odd that Bucky took Stark’s side in this story given his long history with Cap, you are not alone.  But here is an explanation:  SKRULL!  To show Steve what they are up against, Tony blasts a hole in Barnes chest.  As the dead Skrull lays revealed, Tony gets Emma Frost to reach into his mind and show Rogers what he has discovered.

Cap and Tony are on the same side again, but how do they stop the war and capture the Skrulls without them shapeshifting and disappearing.  Why use Project Bellcurve of course!  Not only will it remove super powers, but also the shape shifting powers of alien beings.  (And given that there are “no such thing as aliens” on Battleworld since there are no stars or other planets…where do they think the Skrulls came from exactly?)  Cap gets Hulk-Logan (you gotta read the book to understand that) to toss the weapon into The Divide where all the Skrulls are hiding.  (How do they know it is all of them?  There are no other spies among their ranks besides Bucky?)  Since there are 8 pages left, we need more story so things don’t go off without a hitch.  Seems that the depth of The Divide is blocking Cap’s transmitter to detonate the device.  The true hereos that they are, Cap and Tony head down into The Divide to set the weapon off.

When they arrive they find the weapon has been damaged in the fall.  Tony attempts to repair it while Cap fights against the army of Skrulls that have just shown up.  Above, Emma Frost pyschicly informs both sides of the Skrull deception.  The heroes turn their attention down into The Divide to rescue Tony and Cap and stop the Skrulls.  With time running out and Tony having repaired the weapon, Cap triggers it.  The Skrulls are exposed and stuck in their alien form, many heroes are caught in the blast zone and lose their powers and Tony and Cap are killed in the blast, but the war is finally over.

Until Civil War II, coming this spring from Marvel Comics!

Parting Thought From Ryan: Jimmy covered all the plot stuff and even mentioned my freak out but I just can’t get over how awesome this series ended up.  I would rank it much higher than 12, perhaps only beneath Armor Wars, Squadron Sinister, and Runaways.  Actually, it may be better than Runaways, I just want Jimmy to read the word Runaways a few more times.  Because Runaways.

But the fact that they made two storylines (Civil War and Secret Invasion) into a single zone was brilliant and, best of all, it worked.  So many other zones didn’t work–they made no sense or just ignored anything that might shed too much light on its internal logic.  This one makes sense and it was an intriguing story.  It’s one of the few zones I wish somehow could survive.  But all things must end.  Just like this article.