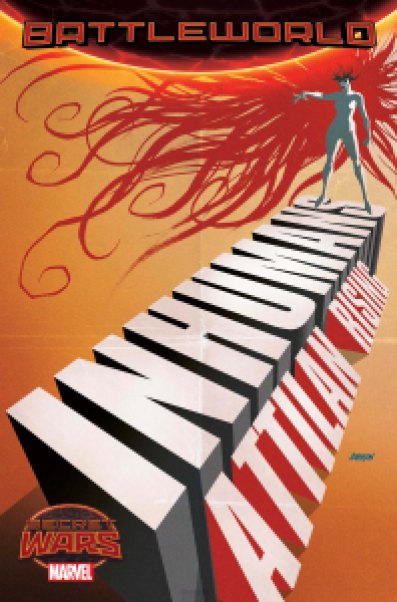 I’ve never cared much about the Inhumans.  And I’m willing to bet if Marvel had the movie and tv rights to the X-Men, we wouldn’t be seeing the massive Inhumans push from them that we are seeing today.  High profile comic launches, essentially the entire season two and looks like season three storylines of Agents of S.H.I.E.L.D. and a major motion picture in 2019 (which seems way too far off and they should be capatilizing on what they are setting up with AoS now, but anyway…), everything is coming up Inhumans.

After the cut I’ll look at the first four issues of Inhumans series from this beast of an event called Secret Wars.  It’s another of those series I had little interest in, but turned out to be quite good.  (Currently holding the number ten spot on our Secret Wars Power Rankings.)

Since this book is about Inhumans it begins exactly on Battleworld where you would expect…Greenland, domain of the Hulks.  Um, what?

It’s here we find a resistance group called “The Voice Unheard” (which will make sense on the last page).  The rebels have transported into Greenland to provide a serum to Hulks that restores their mind and allows them to think again.

They use it successfully on one Hulk that attacks them, but before they can deliver it to the destination they had planned they are spotted by Thors.  To give the rest of the team a chance to escape, a Ghost Rider/Spirit of Ignition called Undead G-Man takes the Thors on a wild goose which ends with him being captured and brought before the leader of the Inhumans: Medusa.

Doom has a keen interest in G-Man and his rebellious friends as well.  They flaunt his holy word and defy his laws.  He cannot allow this to continue.  He tasks Medusa with torturing G-Man to learn the secrets of the insurrection and then to kill him.  (Not send him to the Ghost Races?  Arcade would not be happy with you Doom.)  Doom warns Medusa that while she and her domain of New Attilan are important to Battleworld, he has a long list of others that could be Baron, and if she fails, she will be sent over The Shield.

Medusa gets to work on the Undead G-Man with the help of a psychic known as Sterilon.  G-Man says, “I ain’t no rat.  I’ll die before I sing.”  Which is irrelevant as Sterilon has other methods of getting what he wants.  As he attempts to probe G-Man’s mind, G-Man has a built in failsafe against psychic attacks.  Unfortunately for him, that failsafe blows the top of his exposed skull off, killing him.  Sterilon has managed to extract one phrase from his mind though: The Quiet Room.  (Which will make sense on the last page.)

It turns out The Quiet Room is an elite bar located in Manhattan.  Patrons from all domains make their way there for booze, gambling, deal making and all sorts of excess.  Medusa sends her top investigator Auran to find out what connection The Quiet Room has to the rebellion.  And as would be expected when a beautiful woman enters an establishment such as this alone, she is immediately hit on by the owner from behind the bar.  That owner being Blackagar, aka the Inhuman Black Bolt.  (See, I told you it would all make sense.)

With so many series being so disconnected in Secret Wars, it can be tough to figure out when they occur.  Are they in the past?  Concurrent with the main Secret Wars book in release at the time?  After a particular issue?  Sometimes it can be easy to get some perspective if the stories involve Sheriff Strange or Beta Ray Thor.  This book has a different tie-in that places it clearly after the events of Secret Wars #4.  One 616 survivor Peter Quill, aka Star-Lord, being the on-stage entertainment at The Quiet Room.  (For more on what Quill is doing there, check out his own book Star-Lord and Kitty Pryde.)

Unfortunately for Medusa’s spy Auran, it’s hard to gather any information when the people you are spying on know exactly who you are and why you are there.  So it helps when you have a shape-shifting, chameleon, able to turn invisible, adult Kamala Khan as your back up.  These abilities allow her to follow the rebels to their lair as they discuss their next act: bringing medical supplies to The Blue, the Captain America led section of The Warzone depicted in Civil War.

But being invisible does not make you undetectable, especially to a Man Without Fear and heightened senses.  The Matt Murdock from the 1602 domain is one of the rebels and notices they are being spied on.  One well placed, blood drawing, dagger throw later and Kamala is on the run.  The rebels stop her but not before she lets Auran (with her incredible hearing) know that the rebels base is below The Quiet Room.

Auran gets away from The Quiet Room, and while it wasn’t shown, one has to figure that Kamala got the details of the rebels plans to Auran as well since shortly after, Medusa and her army are waiting near the Warzone for Black Bolt and company.  The rebels have trouble on both ends of the Eldrac Network (which allows them to teleport between domains) as Auran returns with an Inhuman army in tow.

The battle between Black Bolt’s Voice Unheard rebels and Medusa’s New Attilan army plays out on two fronts.  In the area called “New Mars”, the domain of Killraven…who I’m pretty sure has not shown up anywhere in Secret Wars…Black Bolt and Medusa square off.   Back in New York below The Quiet Room, the rest of Medusa’s forces storm the rebels stronghold.

In neither case does the battle go particularly well.  The rebels put up a good fight but on the New York side, they are captured after destroying their underground base along with the portal to the Eldrac Network.  At New Mars, another good fight, but as the rebels are about to lose Black Bolt captures Medusa.  He promises to give himself up if she lets his men go free.  She does and he does.

As his men escape into the Eldrac Network they have a little problem…their end point no longer exists in New York, and they have no idea where they will end up.

Meanwhile, Black Bolt’s remaining rebels find out where they end up with the New York side of the Eldrac Network portal being destroyed: the bottom of the northern sea.  That’s not good.  Especially when a hungry Fin Fang Foom like creature arrives.  The rebels manage to escape and get to the surface only to discover they are in Dystopia.  Where the baron of the domain is The Maestro, and he is not happy to see them.

In the interrogation room, Black Bolt is painfully holding off the mental probing of Sterilon when Medusa enters.  She orders him to stop and tries a less invasive approach, just talking.

Medusa wonders why Black Bolt, an Inhuman by nature has not undergone terrigenesis?  He says because it is about control.  Once an Inhuman has gone through the terrigenesis process, their powers are cataloged and that person is assigned a job that suits their power, whether they like it or not.

And why does he fights against Doom’s rule?  Black Bolt gives a grocery list of reasons including the existence of the Marvel Zombies and Ultrons, the barbaric fights between criminals in Doom’s arena and the fact that Doom prevents any outside help for the citizens of the Warzone.

But what can he do, surely he can’t bring down Doom?  No, but he plans to destroy New Attilan.  Medusa learns that her tower is also broadcasting a signal that invades peoples minds and keeps them compliant to Doom.  It is one of many such towers across Battleworld.  Before she can learn more, the Thor Corps arrive to take Black Bolt away.  He’s been sentenced to fight in Doom’s arena until death.

But once a person is made aware of the signal that is invading their mind, the hold it has is not as strong and Medusa decides she’s not letting the Corps take Black Bolt to Doom after all.