Old Man Logan was a popular storyline that ran through the regular Wolverine title (and one Giant Size) for eight issues back in 2008/2009.  Written by Mark Millar with art by Steve McNiven it is set fifty years in the future where supervillians have won the day and Logan is long since retired.  I won’t spoil anything here, but it is well worth hunting down in trade format.

The story has proven to be so popular it has caught the eye of Doom who made it a domain on Battleworld.  There are even rumors of it being the basis for Wolverine 3.  I’m skeptical of that, but it would help to explain how ageless Wolverine has aged so much since the 2000 release of the first X-Men movie.

Also, if you are like me and haven’t read all of Johnathon Hickman’s Avengers run leading up to Secret Wars, be sure to take Tom’s Road To Secret Wars course at gabbinggeekuniversity.com.  The reading materials are online here: Part One, Part Two, Part Three, Part Four, Part Five, Part Six and Part Seven.

And that course is a prerequisite to the other parts of this series: Part One, Part Two, Part Three,Part Four, Part Five, Part Six, Part Seven, Part Eight 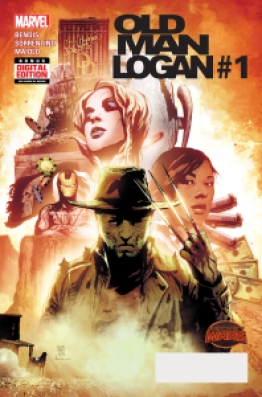 This series is one of those books that seems to pick up where the “source material” left off.  Not as some foreign offshoot with similar properties or characters that share the name of a past event book.  You don’t need to have read the original series to read this, but it would help.  And if you decide not to bother, there is a recap page that does a nice job of giving the key points of the original to bring you up to speed.

One of the biggest changes from 2008 to now is not with Logan, but with the creative team.  There has been some fears about Brian Micheal Bendis and Andrea Sorrentino being very different than Millar and McNiven.  And they are, but that doesn’t mean they don’t get the job done.  While he has a different style and voice, Bendis does just fine.  The bigger change is actually in the art.  While McNiven had a very clean, realistic pencil style, Sorrentino is much more grim and gritty and seemingly painted.  It reminds me of Sin City in a lot of ways.

This first issue opens with Logan back on the path of the travelling vigilante, taking down a gang that has been “stealin’ and sellin’ kids”.  Logan gets no thanks though as the prostitutes that were run by the gang are not happy that they now have to go back to Santa Fe to find work.  And the son of the gang member known as Gladiator attempts to kill Logan.  He is unsuccessful, but Bendis seems to be setting something up for a future that may never come.

Even the rest of the townfolk don’t seem appreciative.  As Logan mounts his horse he tells them all to make something better of themselves or he will come back to town and burn it to the ground and let someone else start it over from the ashes.  The whole thing had a very Clint Eastwood, High Plains Drifter vibe, which worked well.

While riding across the plains, Logan encounters what will be the catalyst for the rest of the series: the head of an Ultron falls from the sky and crashes in front of him.

Logan decides this bares investigation and heads to Hammer Falls, Nevada because it was the last place he saw an Ultron, but that was a series 8, while the head is from a series 5.  (How Logan knows the Ultron model numbers we better not think about.) He checks in with on an old friend to see if she knows anything about it.  Unfortunately The Punishers (yes, with an “s”) have already paid Emma Frost a visit and left her for dead.  She barely makes it through a conversation with him, and has no information of use.

With Emma dead and his questions no closer to being answered, Logan decides to investigate the only avenue left to him and uses his claws to climb the massive wall that separates the domains.

So it’s Battleworld and you’re not supposed to travel from one domain to another.  In search of answers as to the appearance of an Ultron head crashing in your back yard you decide to climb the border wall.  What’s likely to happen when you reach the top?  If you guessed you’d get struck down by lightening and left for dead by a Thor, you’d be a winner.  Luckily you land on the other side of the wall and have a healing factor.

As Logan recovers he is first attacked in the jungle by a tiger and then an old friend by the name of Sabertooth.  Before the real battle can begin, Logan is saved by people he thought long dead: Storm, Colossus, Iceman and the rest of the X-Men.  It’s a bit much for an Old Man to take and he passes out.

Once he awakens surrounded by other X-Men including Emma Frost and Magneto, he is no less confused.  “This isn’t real…I killed you all.”  It’s interesting that it appears that Logan has no knowledge of the other domains and their having duplicates of his friends.  We learned last issue that he knew there was a world outside the walls of his domain, and Doom was God, but everything else seems to be a shock.  And not just to him.  The X-Men in this realm seem shocked to see him as well, remarking “We have a Logan.”

Without warning Sabertooth and his allies attack the X-Men’s hideout, thanks to Creed being easily able to track Logan.  Blaming Logan for bringing their enemies to them, Magneto abuses Logan’s metallic skeleton to thrown him threw a wall into the nearby courtyard.  As he gains his footing, Logan is shocked again to be face to face with Apocalypse.

(Just out of curiosity I checked the Secret Wars Battleworld map and the Wastelands where Old Man Logan occurs does indeed border on the Domain of Apocalypse.)

While I was dropping off Ryan’s lunch order from Pieous he had this to say about these two issues:

jimmy: I read those too. Enjoying them, but you are right issue two is short. I think some of the reasons Old Man Logan #2 seems so short is because issue one was oversized and issue 2 has a lot of pages with no dialog. It is an incredibly quick read, but is the standard 22 pages.

ryan: Yeah. I looked at the page views and saw many big panels with no speech.

More of that witty and informative Gabbing Geek banter.  You can’t get analysis like that anywhere else!