You know what might be a good way to work on a marriage?

Being trapped in a car sinking into a tar pit.  Who knew?

Yes, we have some drama going on.  Judy knows Smith isn’t Smith and would reveal it to Smith, but Don stops her since they are, you know, driving back with the fuel.    Better to do that face to face.  Besides, they have to drive through a rock geyser field very quickly for some reason.  They went around it the first time.  Best to gun the engines and hope for the best.

Oh, that tar pit thing is because John and Maureen went out exploring a bit and ended up stuck in one.  They lost the antenna and were sinking into hot tar that would probably kill them one way or another if they don’t get out.

Now, the Robinsons are probably safe on this show, so we know they’ll probably get out after they realize they still love each other and all it takes is creative use of a helium balloon.  Seriously.

As for the ride back, well, the chariot toting the fuel loses a control cord, and one guy named Evan goes out to fix it on the moving vehicle.  The geysers start up early and he’s flipped off and under the fuel truck.  Plus, a rock punctured the fuel.  Lifting the truck to try and pull Evan free will lose the fuel, while leaving him there will surely lead to his death.

What do they do?

Judy and Don pull the truck up and free Evan.  And he dies anyway not long after that.

Is that all the bad news?  Not quite.  That jackass leader guy Victor learned from his son (Penny’s love interest) the planet was falling apart.

Oh, and Smith got the Robot back together.  She doesn’t like committing acts of violence.

She’ll let the Robot do that for her. 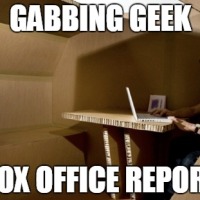