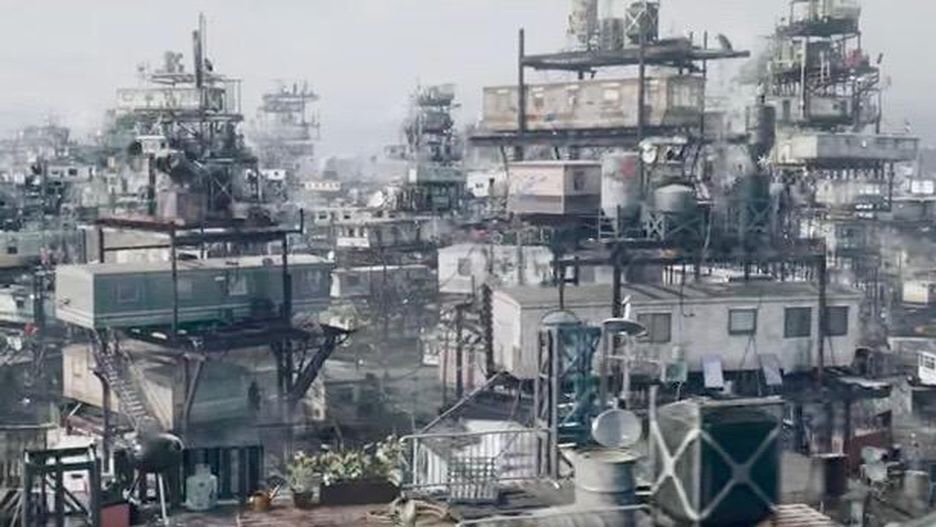 Ernie Cline’s seminal Geek classic comes to the big screen courtesy of Steven Spielberg. A property that is a living breathing homage to Geek media, filled with classic icons from media history, and directed by a guy responsible for some of the best properties IN Geek media?

How would the film adaption stand up against the beloved novel?Ready Player One picks up in the near, pre-post apocalyptic future (chew on that one!) where the world has gone inward and a virtual reality portal has replaced television, the internet, and even reality itself as the entertainment drug of choice.

The great James Halliday, a Steve Jobs stand-in, has invented The Oasis, where people can do anything and be anyone.  It is a place of pure geek fantasy.

When Halliday dies, his eclectic will dictates that anyone who finds three hidden keys and solves his ulitmate game shall own the Oasis.  That’s big.  Think Google, Disney, Amazon, and Dell all rolled in one.

This brings to bear the “sixers”.  People looking for the eggs as employees of the dreaded IOI Corporation which is trying to take control of the virtual universe.  That’s bad.  Think Yahoo, The Weinstein Company, Exxon, and Hewlett-Packard all rolled in one.

Opposing the sixers are the other “gunters”; clans or solos trying to find the Easter egg of the Oasis to win the challenge.  Wade Watts, who lives in the favelas of Columbus, Ohio known as the “stacks”, leads a journey with his friends to beat the sixers to the keys and protect the Oasis from corporate douchery.  Add some CGI and licensed media from other properties, and you have yourself a film.

Going in to the theater, I was as perplexed about a film as ever.

Fans of the book were complaining after the first teaser trailer.

The voiceovers seemed heavy on exposition.

Reviews rolled out at a weird pace.

Even positive reviews were somewhat euphemistic in their description of the “fun” of the movie.

So how was Ready Player One?  I’d say the reviews got it right.  I liked this movie.  It was “fun” but it was definitley DUMB “fun”.

I enjoyed the whole film but never felt challenged, thrilled, or delighted (except maybe during a VERY inspired scene leveraging the movie The Shining ; a smart replacement for the War Games sequence from the book.

Director Steven Spielberg (Always) does a good job as usual in creating a visionary world, but I am sad to think he is no longer that relevant in making groundbreaking films.  It starts to make you think that maybe time has passed him by and that the Christopher Nolans and Guillermo del Toros of the world have left him behind.

So don’t wait for a post-credit scene. They didn’t do that in the 80s…

The project is definitely a scope worthy of Spielberg’s attention, but it lacks a sense of edge that makes his modern works seem a bit adequated.  Check out our review of Spielberg’s films to see if we thought those projects were also worthy of the hand of the master.

I think one of the bigger missed opportunities was the casting of Ty Sheridan (X-Men: Apocalypse) as a weak leading character.  The character in the book is not very deep and Sheridan still seems to underwhelm. He was passable as the avatar Parcival, spouting Clines cheesy pop culture references with as much effectiveness as possible.  But when he wasn’t enabled by CGI, he was flat and uninspiring.  Part of me wanted to think that Spielberg had him deliver that kind of performance to contrast the empoweriing nature of the Oasis versus the mudane reality of day to day life.  But, honestly, I just think he sucked…

Olivia Cooke (Me, Earl, and the Dying Girl) was solid as Artemis and continues to show that she should get better and better roles.  Ben Mendelsohn (Rogue One) played the exact same villain he played in the Star Wars universe; a bureacrat with a mission and an army.

I would have enjoyed T.J. Miller (Deadpool) as a Boba Fett wannabe, but I am really having trouble accepting performances from people embroiled in the worst kind of #MeToo scandals.  Spielberg could have easily recast him with Jack Black or Chris Rock with minimal effort and cost (his role is CGI). The film would have been better for it.

Special praise goes out to another strong Mark Rylance (Bridge of Spies) performance. Despite looking iffy in the previews, he delivers a beautiful and nuanced performance as the haunted genius who delivered something special to the world, that others wish to exploit.  Rylance is killing it in every role he plays these days.  Talk about a guy who is having a moment later in life.

Acting, directing, and script?  Whatever….

Ultimately the film is about SFX and cameos, and in this regard Ready Player One delivers.  I can’t wait for someone geekier than me (high bar to clear) to do a break down of all the branded characters who appear, but I counted Batman, Iron Giant, The Twins from the Shining, and at least one Ninja Turtle!  Fun stuff!

Look…I will level with you…if you are looking for the next Dark Knight, Logan, or Deadpool, this isn’t that level of quality.  If you are looking for a geek answer to The Fast and Furious series or a film that could play in the bottom half of the MCU, AND go in with those expectations, you will have….”fun”…

Overall, I give READY PLAYER ONE 8 “You Know I Don’t Like Scary Movies” out of 10.