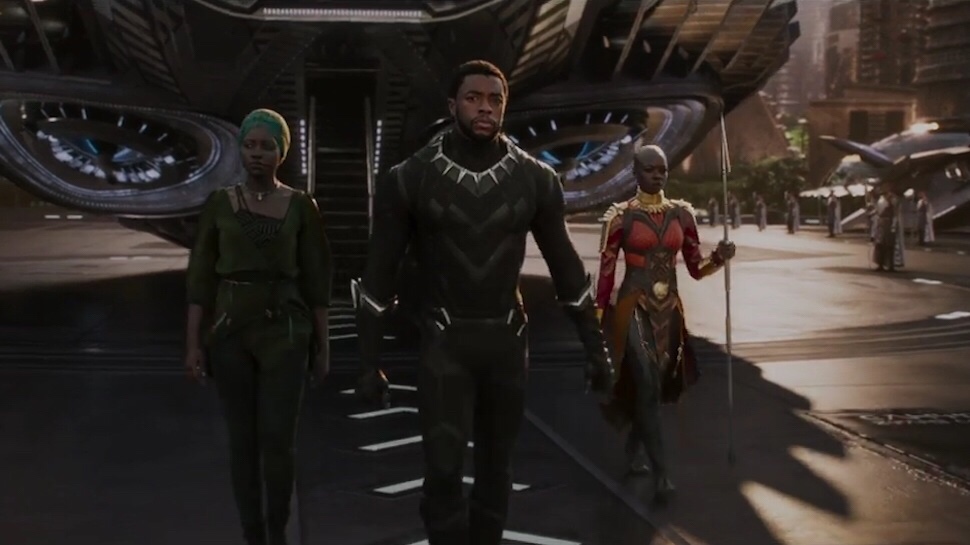 If you remember back to before Black Panther‘s cinematic debut was scheduled, it seemed as if Marvel was lukewarm on the idea of introducing him.  Sometimes internet rage produces a righteous result and it was announced that they would release the first big budget, mainstream superhero film featuring a black superhero (based on the first black superhero in comics history).

Could Marvel deliver a blockbuster MCU entry and do justice the historic nature of a Black Panther release?

Absolutely!  Black Panther hits all the rights notes; playing within the MCU “template” of solo films but offering enough fresh vision and charm to stand out from middling entries like Ant-Man, Dr. Strange, or Age of Ultron.

The film picks up right after the events of Captain America: Civil War as T’Challa, played with regal grandness by Chadwick Boseman (Get On Up), returns to his home nation of Wakanda for his official coronation.

Before he can become the undisputed king of the secretly high tech African nation, T’Challa must first face off against tribal challengers wishing to contest his ascendancy.  During this process we meet rival tribe chieftain M’Baku (known in comics as Man-Ape) who is played by relative newcomer Winston Duke and who delivers some of the more interesting moments of the film.

Like with SpiderMAN: Homecoming, Black Panther benefits from its spinning-off from Civil War, as the action can start in earnest without a ton of origin build up.  While trying to right an old wrong committed against Wakanda, T’Challa quickly travels to Asia and faces off against some new foes who would drive the action forward.

These events put T’Challa at odds with Killmonger, played by Michael B Jordan (Creed), an American black ops soldier with a vendetta against the kingdom of Wakanda.  Battle lines are drawn, setting up a film more worthy of the title “Civil War” than Captain America 3!

Black Panther really shines despite the artistic handcuffs the Marvel model puts on its films.  It is hard for them to be truly great (which is why they are generally never awful), but this entry has enough unique clicks that I feel like I am getting something different than a rewrite of the Dr Strange origin story.

First and foremost is the film’s diversity.  Other than Martin Freeman (The Hobbit: An Unexpected Journey) and Andy Serkis (um….also The Hobbit: An Unexpected Journey), the principle cast is made up of actors of African descent.  To their credit, Marvel didn’t pressure director Ryan Coogler (Creed) to play it safe with the opportunity. The film explores issues of slavery, colonialism, and discrimination that remain relevant and impactful today.

Instead of pulling punches, Coogler comes right at these important matters.  I was a little surprised a bland company like Disney would include a hot button issue such as race in one of their tentpoles, but between T’Challa’s MLK and Killmonger’s Malcom X, the topic is intelligently and thoughtfully examined.

The second interesting aspect that differentiated Black Panther from other generic MCU films was the exploration of T’Challa’s home country.  Like Gotham City in the Dark Knight series, Wakanda is almost a character itself.  I loved the scenes where we learned more about its history, technology, and tribal cultures. It was a perfect blend of modernity (magnetic trains and VR fighter jets) and ancient tribal rituals (the coronation processes and rituals are fascinating).

From a performance perspective, Chadwick Boseman once again proves his charisma and ability to disappear into a character (he’s played Jackie Robinson, James Brown, and King T’Challa) allow him to carry any film.

Oscar winner Lupita Nyong’o (12 Years a Slave) was great but I felt she sufferered from too little screen time given a packed cast.  Leader of the Dora Milagia (aka “Team Jenny”) Danai Gurria (The Walking Dead) and current Oscar nominee Daniel Kaluuya (Get Out) find a way to break through with some memorable moments as tribal leaders who play a huge role in the film’s third act.

Stealing scenes where T’Challa’s family: Angela Basset (Green Lantern) radiated elegance as the king mother and Letitia Wright (The Commuter) stole every moment possible as the King’s sister who is one part sassy teenager, one part Q from James Bond.

The only disappointments were by two of the best actors in the cast.  Oscar Winner Forest Whitaker (Rogue One) was pretty unmemorable in the shaman role that we’ve seen before.  I like Whitaker, but that role was so lukewarm it could have been played by ten different actors and been no less impactful.

The real disappointment was Michael B Jordan’s Killmonger.  Marvel’s “villain problem” continues as Killmonger felt like a placeholder to deliver some good lines, set up the conflict, and allow for T’Challa to have someone to fight.  Jordan didn’t have much to work with here, and the result is a villain as memorable as the badguy from the third Lethal Weapon movie or fourth Die Hard flick…

Still, the negatives were minor and we were delivered a solid adventure and a strong entry into the MCU.  I leave the theater wanting to see more of Wakanda and the adventures of King T’Challa.

Overall, I give BLACK PANTHER 9 “Vibranium Product Placement Lexuses” out of 10.