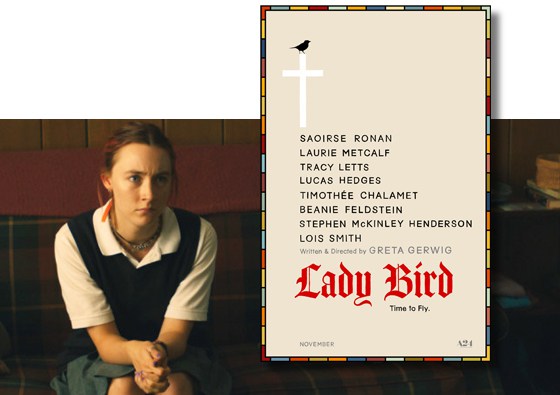 In a sign that the Oscar season has officially begun, I took my first journey of the year down to Austin’s Violet Crown Cinema to see a movie that has, at the time of this writing, a 100% Rotten Tomatoes score?  So….did it live up to the hype?

Lady Bird is a perfect art house dramedy… which is my go-to genre.  If they could make an Indie dramedy adaptation of Nightwing with a sound track by the Gin Blossoms, I might just declare victory and switch from movies to rock collection (“They’re free!” -Ryan)

While Lady Bird doesn’t have me leaving cinema to become the next Andrew Ketcham Barnett, it does land a solid blow right in the feels.  As with movies like The Way, Way Back, The Descendants, The Perks of Being a Wallflower, and this year’s the Big Sick, Lady Bird flows effortlessly from cracking you up to forcing you to revisit the most painful emotions of your youth.

In her directorial debut, actress/writer Greta Gerwig (most recently starring in indie dramedy Maggie’s Plan with Ethan Hawke), delivers an amazing coming of age story set in 2002.  I’m not sure when 2002 became an area of nostalgia, but here we are…  The film, which Gerwig also wrote, explores the life of a quirky young lady in her senior year in high school.  Anyone who ever felt different, weird, or that they needed to be somewhere else to fit in will connect with this movie.

Two-time Oscar nominee Saoirse Ronan (Brooklyn and Atonement) dominates as the eclectic teen coming into her own while dealing with a complicated relationship with her mother; played with wonderful complexity by TV and film alum Laurie Metcalf (most famous for playing Sheldon’s mother on Big Bang Theory and Rosanne’s sister on Rosanne.)  Both deliver amazing performances and should vie for Oscar gold in the lead and supporting actress categories.

Ronan and Metcalf are well-served by an excellent supporting cast which includes Oscar nominee Lucas Hedges (Manchester by the Sea) and Stephen Henderson (Fences…as well as Manchester by the Sea), but it is Tracy Letts (better known as the Pulitizer Prize winning writer of August: Osage County than for his acting) that stands out as Lady Bird’s father, Larry.  Letts takes some very small scenes and fills them with humor and love, making the most of his opportunity.

Lady Bird is at its core, a simple film.  But it is a really beautiful film and there is something in this movie with which everyone should be able to connect.

I give Lady Bird 9.5 houses on the wrong side of the tracks out of 10.