Sideshow Bob keeps trying to do away with Bart Simpson, and mostly he keeps failing.  A Bob Episode is usually good fun, so let’s get to it.  This is his tenth caper after all…

Homer is out at the electronics store with Bart, intent to only buy the cheapest battery possible.  He turns down numerous side offers, including one for sex with a sales associate, but then gets to the checkout and learns he can get his fifty cent battery for free if he buys a $200 TiVo unit.  Three guesses what he does.

Actually, having a device that allows the viewer to speed through the commercials becomes of great interest to Marge.  She’s zipping through all kinds of commercials, some of which look like commercials that have appeared in past episodes.  But this is Marge we’re talking about, so she’s easy to guilt into things.  In this case, she has a nightmare where guest star Keith Olbermann calls her the worst person in the world (worse than both Satan and Mr. Burns!) for not watching the commercials that pay the salaries of everyone who works on TV including the large team that keeps Olbermann from looking like an undead swamp monster.  Once awake, Marge goes back to watch all the commercials she skipped through, and it’s only when the other Simpsons comes to intervene that something comes on of interest to the whole family:  a new rib joint called Wes Doobner’s World Famous Family Style Rib Huts.  Ribs for Homer, tofu for Lisa, easy placemat mazes for Bart, and something else for Marge that I plum forgot.  That cowboy owner sure seems friendly…maybe a little familiar.

Yeah, it gets more familiar when the Simpsons get to the place, see no one else there, and then get locked inside by Wes, who sounds a lot like Kelsey Grammer.  He ought to.  He’s really Sideshow Bob!  The restaurant name was an anagram for “Sideshow Bob’s World Famous Family Style Return”!  That’s not much of an anagram, actually.

Bob’s plan?  After tying the Simpsons up and repeatedly explaining to Homer that there are no ribs coming, he sets a laptop with a faulty battery on top of a pile of TNT boxes to blow the Simpsons all up.  Then he misquotes Shakespeare, but Lisa corrects him, and he has to look it up on that laptop, which blows up and takes out Bob instead of the TNT or the Simpsons.

At trial, Bob’s parents were there.  His mother, Dame Judith Underdunk is the greatest actress of her generation.  His father, Dr. Robert Terwilliger Sr. (guest voiced by John Mahoney, AKA Frasier’s dad) testifies that Bob has a congenital heart defect that led him to evil somehow.  Bob pulls out a bottle of nitroglycerin, and Bart nabs it and tosses it out a window.  It hadn’t been going well for Bart up to that point, and it gets worse when it comes out those were pills for Bob’s heart condition and the master villain promptly dies.  Now the town hates Bart.

The funeral is sad.  Bob’s whole family is there.  His parents.  His brother Cecil (David Hyde Pierce again) is out of jail for it.  His strangely silent Italian widow.  His son Gino.  Many, many clowns arrive in a single car.  Krusty sings a song that also hawks a Sideshow Bob “Best of” DVD because he’s Krusty.

A later chat with Cecil, who admits to also hating Bob, gets Bart to go to the funeral home later before a cremation to say goodbye to the master criminal.  Yeah, too bad Bob isn’t dead.  He and his whole family were plotting something extensive just to get Bart burned alive.  It would have worked too, if Lisa hadn’t realized it made no sense to get a special coffin for a man with large feet since dead people don’t exactly need to be comfortable.

So, Bob’s whole family goes to jail.  They’ll be sharing a cell for the next 87 years or so. 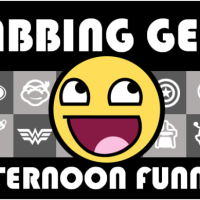