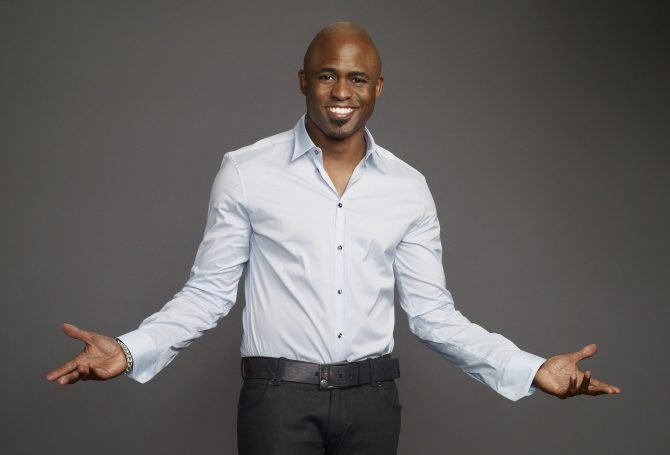 I am a self-admitted musical theater geek.  And, like everyone who’s heard the soundtrack or seen the show, I’m also a huge Hamilton fan.  Heck, I tried to convince Jenny and Watson how awesome the show was back before it opened on Broadway during our podcast (back when we did those).  Last week I saw Hamilton for the fourth time because who needs a savings account, right?  I purchased the tickets as a birthday present for my wife who was desperate to see the Chicago production for the three main players: Miguel Cervantes as Hamilton, Karen Olivo as Anjelica Schuyler, and Joshua Henry as Aaron Burr.  And although all three were major draws, the biggest one for my wife was Joshua Henry.

So, of course, he left the show two days before we had tickets.

Not his fault–he moved to the national tour which starts in San Francisco in March and rehearsals were about to start.  I was hopeful he would stay a few weeks more, but it was not to be.  Instead, we got his replacement: Wayne Brady.

This article is not to bash Wayne Brady.  I like Wayne Brady in certain elements.  We went to a recording of Whose Line is it Anyway? in LA many years ago and Wayne is an impressive talent.  When you watch the show everything is flawless and rapid fire–in real life there are huge gaps while the performers think of things to say or sing for the various games.  Everyone but Wayne Brady.  He really does come up with those melodies and lyrics in real time and it’s impressive.  He definitely has talent.  But just because you have talent doesn’t mean you can do anything with it.

The role of Aaron Burr in Hamilton is incredibly complex.  He is the narrator, the villain, the frame of reference for so many moments.  We cannot like him, but we cannot truly despise him either.  He’s the opposite of our hero in his approach to life, but you can’t exactly say it’s wrong.  Wayne Brady’s approach to the Burr character, however, makes it all a bit of a muddled mess.

Yes, I’m biased because I saw Leslie Odom, Jr. perform the role.  His performance as Burr is one of the all-time great musical performances of all time.  He took this complex character and made you feel his conflict, even if you don’t necessarily understand it.  Burr has many great moments in the show, but as listeners and fans know he has three big songs to measure his character arc.

First, there’s the amazing song Wait For It.  Burr is reserved where Hamilton actively pursues what he wants.  Hamilton came from a background where most people died around him–life is short and every moment is precious.  Burr came from a more dignified background–even though his parents died that wasn’t the norm and he expects to wait for moment to shine.  “I’m not standing still, I am lying in wait” he sings.  So he waits, and even though he fights for our new nation he doesn’t fight for the US Constitution so we resent him a bit for sitting on the sidelines.

Second, Burr finally realizes that he doesn’t want to be on the sidelines forever during The Room Where It Happens.  The song isn’t just about the inner workings of politics but it’s also about Burr’s sudden realization that he wants to be a part of it.  At the end of the song, Burr gets it–he wants this.  And it stuns him that he’s finally discovered what he wants.  The moment in the song, the pregnant pause Odom sings in “I…..want to be” is an incredible moment for the character and the singer.

Finally, Burr ends his arc in The World Was Wide Enough where Burr must come to grips with his role in the infamous duel.  When Odom performed this song, the conflicting emotions playing out in Burr’s mind, Odom made them all real.  The last time I saw him in the show was May, 2016.  He’d been performing as Burr hundreds of times for well over a year.  And he made it seem like the first time.  By the end of the song, Odom was crying actual tears as he sang “I survived, but I paid for it.”  It’s crushing, almost more so than any other musical.  Many musicals have villains.  Almost all of those villains are defeated.  How many villains actually win, but lose by realizing they’re the villain?  Burr might be the only one.

All of these moments define the Burr character.  And while Odom did it to perfection there has to be room for other people to perform the role.  Wayne Brady just isn’t that guy.  Or at least he wasn’t when we saw it.

I’m trying to be as fair as I can.  He didn’t have a lot of time to prepare for the role–at best a few weeks.  He flubbed a few lines (one he switched a word, another he forgot an entire line, and that hurts you more in a show where 90% of the audience knows every word).  But the part that hurt his performance the most was what makes Wayne Brady such a talented performer.

Wayne Brady is a showman.  Aaron Burr is not.  And there was no meeting in the middle.

Wayne Brady’s Burr gets more laughs than Odom, no doubt.  He knows how to milk the lines and his comedic timing is impeccable.  But all of his songs were delivered with the same desire to get a reaction, the same rush to make us love him.  An understandable urge, but when we get to The Room Where It Happens there is no change in Wayne Brady’s Burr.  He’s wanted to be in the room for the entire show.  He’s wanted to be the guy in charge from the moment he stepped on stage no matter what the lyrics said.  His version of Wait For It wasn’t a study in being reserved, it was a belting solo from Star Search.

By the time we get to the end, there is no subtlety in Brady’s Burr–we don’t feel any conflict during The World Was Wide Enough.  This is his show-ending song and that’s all it sounds like.  His performance is just…over.  Unlike Odom’s Burr where we feel like his agony lives on far past the final notes.

It’s possible that Brady can grow into the role.  It’s also possible that he wants his Burr to come across the way he plays it.  Which is up to him and the director, I suppose.  It’s just a bit disappointing.  As a Hamilton fan, the character as written doesn’t lend itself to Brady’s performance.  And even though he’s a bit of a celebrity name, Hamilton doesn’t need a celebrity in any role.  Hamilton the show is the celebrity and the tickets are sold out for months.  I would think there are other performers who would love the opportunity to shine on stage.  This kind of stunt casting typically happens in longer running shows or revivals.  Hamilton doesn’t need it.

Instead, I think Brady really wanted to show that he could do the role.  He probably wants to break out of his typical casting and Burr is a great chance to do that–but instead he just plays Burr like Wayne Brady singing Burr’s songs.  It’s a very good karaoke Burr, for both good and bad.

Still, any show of Hamilton is a fun show.  And Cervantes and Olivo were amazing in their roles, as were the rest of the cast.  While it’s hard to compare them individually to the original performers, they all brought some great moments to their roles.

And in the meantime it looks like I’ll be looking for some Hamilton tickets in San Francisco.  Anyone need to buy a kidney?  I’ve got a spare.