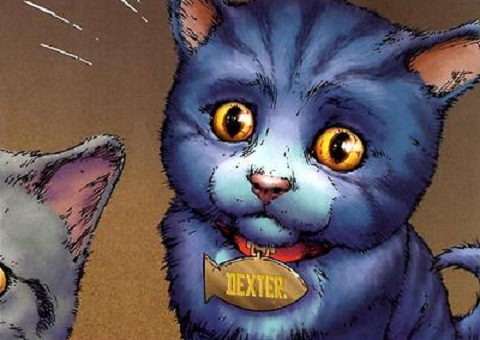 The basic concept of the Silver Age Green Lantern was that the Guardians of the Universe created an intergalactic police force that would patrol various sectors of space, armed with a ring that could do more or less anything the wearer wanted it to with sufficient willpower.  All the energy in the ring came out looking green, and that was that.  Originally, a single yellow ring was worn by former Green Lantern turned bad guy Sinestro.  Writer Geoff Johns explored that concept, and came up first with the idea of another Lantern Corps armed with yellow rings like Sinestro’s.  And hey, if you’re going to have rings that work off green (willpower) or yellow (fear), why not try some other colors?

That’s where Dex-Starr comes in, one of the most tragic anti-heroes in recent comics.  Yes, it is tragic.

To start, there were eventually all manner of rings, each of which responded to a different color and was connected to a different part of the “emotional spectrum”.  Green, in the middle of the spectrum like on a rainbow, was the most stable and responded to willpower.  Yes, willpower isn’t an emotion, but the way the ring works “courage” would probably be a better way to describe it.  Each color had specific powers and weaknesses, and the further the color was from green on the spectrum, the more likely the poor fellow wearing the ring would be more controlled by the ring instead of the other way around.

So, on either immediate side of green were yellow (fear) and blue (hope).  Yellow works against green because fear can sap will, but the rings also work off the wearer’s own fears.  Blue Lanterns recruit slowly, acting more like holy men than anything else.  Blue can supercharge green, work against yellow, and actually can’t do much of anything without a Green Lantern nearby because hoping isn’t enough if you don’t also act.

The next two furthest out were indigo (compassion) and orange (greed).  The Indigo tribe is made up of condemned prisoners, and they’re forced to care by their rings.  On their own, they can teleport great distances, and can copy the powers of other nearby Lanterns.  There’s only one Orange Lantern, because to make a Corps would require sharing the power.  Orange Lanterns exist largely as constructs of stolen identities of anything that got killed by the original Orange Lantern without his even trying.  Fortunately, he isn’t that bright, but wearing the orange ring causes the wearer to want, oh, everything, especially the ring.

Finally there’s violet (love) and red (rage).  The violent rings were worn by the Star Saphires, an all-female corps originally dedicated to seducing Green Lanterns and then putting entire planets in some sort of crystal stasis.  Most Star Saphires were reprogrammed for love and romance.  It was not pretty.

Ah, but we’re really here about the Red Lanterns, because that’s where poor Dex-Starr ended up.

See, Dex-Starr started as a joke.  The artist on the Red Lantern special drew him in the crowd based off his own pet, and the big moment was when the little guy used his favorite tactic for dispatching enemies:  sneak up close looking cute, then vomit deadly acid plasma on them.

See, Dex-Starr was a cat.  Just a regular house cat from the planet Earth.  He was adopted as a kitten by a shy woman in New York City who named him Dexter and took him home.  One night, a burglar broke in and Dexter scratched the guy.  That woke up Dexter’s owner, who screamed for help.  The burglar killed her.  Detectives the next day literally kicked Dexter out the door so he wouldn’t contaminate the crime scene.  Now living on the streets, Dex was caught by some assholes who tossed him into a sack and then dropped him off the Brooklyn Bridge.

Ever had a cat?  I do.  Those guys can get really mad under the right circumstances.

But see, rage and anger can attract a Red Lantern ring, which is what happened here.  Red is on the really far edge of the emotional spectrum, so aside from one or two really strong-willed types, Red Lanterns tend to be nearly mindless founts of rage and anger.  The red plasma energy will replace all the Lantern’s blood, and removal of the ring can kill the wearer since that means their hearts stop.  Red Lanterns are basically really, really angry all the time, and all but a few are a bit short on communication skills.

Actually, in Dexter’s case, his communication improved, and now he can speak a little.  Short, basic sentences, but it’s still words.  You know, the sort of thing a cat would say if it were eternally pissed and could talk.

So, Dex-Starr (his name tag got a wee bit damaged, so he got a new name) escaped the sack he was in before he hit the water, and then flew up to take out the aforementioned assholes who tried to kill him.

Then he flew off and took out the burglar who killed the only person who ever showed Dex any real affection.

Now, it does get a little better for Dex-Starr.  He found a new owner, more or less, in the form of Red Lantern leader Atrocitus.  The Red Lanterns are generally treated as something of antiheroes, and while officially Dex-Starr is said to be one of the most dangerous and murderous of the bunch, his backstory suggests that he should be at least a little pitied.

Or at least, don’t be an asshole who kills animals for sick kicks and giggles.