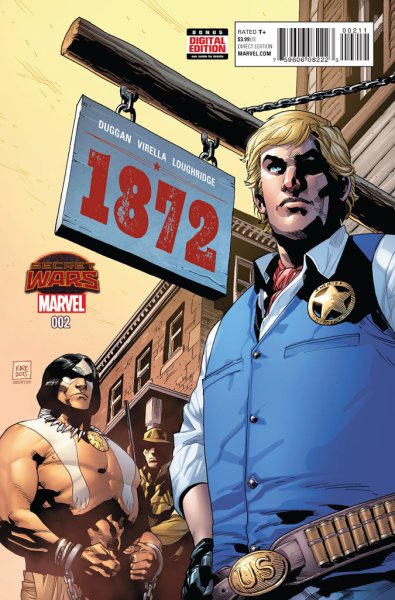 Most alternate realities that make up the multiverse at both Marvel and DC Comics are variations on a theme.  There are some completely originally universes, but most are inhabited by Elseworlds and What If? stories that take our familiar heroes and villains and apply a twist.  Maybe the hero and villain have changed roles.  Or our hero was raised in Russia instead of on a farm in the middle of the US.

A common twist is to time displace characters.  For example, what if Batman was around in the days of Jack The Ripper?  In 2003, writer Neil Gaiman transplanted the Marvel Universe to the Elizabethan Era in the hit 1602.  Not surprisingly, a domain of Battleworld gets dedicated to this time period in 1602 Witch Hunger Angela.  Unfortunately, while the original series was a huge success, this Secret Wars version is quite poor.  But to fulfill my contract here at Gabbing Geek, I still need to cover the last two issues after the break.

In much the same vein, the Secret Wars series 1872 takes the Marvel Universe and places it in the old West.  So after the break I’ll also be cluing up the final 3 issues of that series…for better or worse.  (For worse if you ask Ryan.)

Sheriff Steve Rogers is protecting the Indian Red Wolf.  The Sheriff believes that even Red Wolf should get a fair trail.  Unfortunately in the corrupt town of Timely, the Indian has already been declared guilty and sentenced to hang.  But that will happen over Rogers dead body.  Which Wilson Fisk’s assassins are happy to oblige.

The only person apparently distraught by all of this is the drunkard Tony Stark.  In anger he returns to his workshop and hammers away at a new creation.

With the death of Steve Rogers there’s a new Sheriff in town by the name of Red Wolf.  And he wants revenge for Rogers murder.  He tracks down the assassins of Wilson Fisk (probably not that difficult in a town with a dozen buildings) and kills Bullseye.  He catches The Grizzly on fire and is about to kill Elektra when Fisk turns the town against him by offering $1000 to whoever kills the Indian.

Red Wolf again finds himself on the run, but not for long as he is stopped by a recovered Grizzly.  Red Wolf is about to join Rogers in the afterlife when Tony Stark bursts through a nearby wall in his new suit of armor.  (Man, he works fast!)  Stark kills the Grizzly and the townsfolk now feel that $1000 might not be enough to attempt to kill the Indian.

Meanwhile, Bruce Banner and Natasha  Barnes (widow of one Mr. Bucky Barnes) have set off in an attempt to destory the dam that is blocking the water from getting to Red Wolf’s tribe.  Unfortunately they don’t make it that far and are stopped by Simon Williams, caretaker of Governor Roxxon’s River Relocation Project.  Williams then begins to torture Banner for the other names involved in the rebellion against the Governor by making him drink the bottles of “green goop” that he had concocted for blowing up the dam.  I can see where this is going… 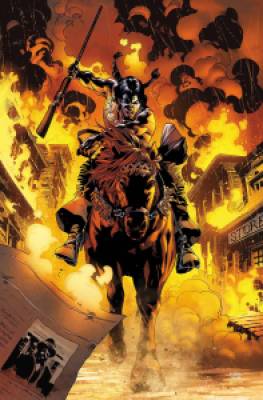 Between beatings, and over the screams of a female from the nearby barracks, Bruce Banner questions how Simon Williams can torture a woman.  Williams says that it is Banner that is torturing her by not telling him what he wants to know of the rebellion against Governor Roxxon.  Williams then sends one of his men to fetch the lady Barnes, only to discover that she was faking the cries all along and has killed the rest of Williams men.  Williams and his other man are not much longer for this world either and Barnes pulls a poisoned Banner to his feet to finish their task.

Back in Timely, some of the townsfolk are still foolish enough to attempt to kill Red Wolf, even with Tony Stark and his iron suit helping to protect him.  During the melee Red Wolf finishes off the assassins that killed Sheriff Steve Rogers by killing Elektra.

At the dam, the delay of being captured by Simon Williams means that Banner does not have time to create a slow release mechanism to trigger his explosion.  He has to add the catalytic element himself, which is heroic, but he is dying anyway.  Williams poisoned him last issue by making him drink his “homemade nitro”.  As Natasha rides to safety, Banner and the dam go up in a big green mushroom cloud.  Hmmm…

At Timely, Red Wolf has managed to capture Wilson Fisk by stabbing him in the eye with his Sheriff’s badge.  The townsfolk tell Red Wolf to kill Fisk, but Red Wolf stands for law and justice now so he refuses and leads Fisk to the prison instead.  Fisk knows that there will never be a trail.  As does Natasha, who has returned and guns Fisk down in the street.

The series clues up with Red Wolf staying on as Sherriff, a giant footstep out in the desert filled with a pool of green goo that an unfortunate spider makes his way through on the way to the Parker homestead, a very familiar looking pair of vigilantes known as Pastor Frank and Merc taking matters into their own hands and the birth of Stark Industries by a now sober Tony Stark. 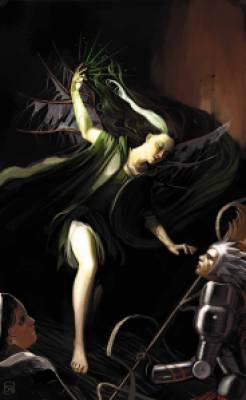 We are big fans around here of Neil Gaiman’s original 1602 mini-series.  This Secret Wars version?  Not so much.  It currently ranks near or at the bottom of our individual Secret Wars Power Rankings (final update coming soon!).  With it’s Shakespeare allusions I think that Tom gets the most out of it, but even he is no fan.

As for this issue, we are introduced to the 1602 versions of Rogue, Cloak and Dagger.  They do some stuff and I think Cloak and Dagger are Romeo and Juliet.  Rogue eventually kills herself to end her curse and the Enchantress shows up and fulfills her promise to kill Serah after three Faustians have died.

Angela is crushed at the loss of her friend.  But after the funeral pyre, Angela picks up Serah’s skull to find it singing Simon and Garfunkel (big hit makers in the 1600’s) and we get more references to Shakespeare’s Hamlet as the reports of Serah’s death appear to be greatly exaggerated.

(Editor’s note: “Jimmy, Scarborough Fair is a traditional song that dates back to the 1600’s.”

Yeah, but then I can’t use my joke. 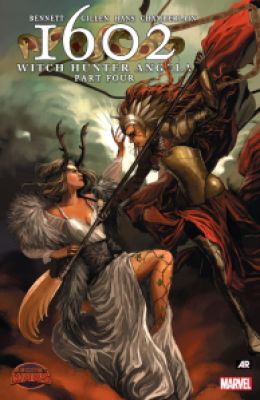 Angela rides to face The Enchantress, Serah’s singing skull strapped like some macabre jewelry around her neck.  In the Realm of Fairie, Angela finds her prey.

Battle ensues and The Enchantress tells Angela that if she strikes her down she will become more powerful than she could ever imagine.  Wait, wrong movie.  If Angela strikes The Enchantress down, Angela herself will become the new Faire Queen.  Angela accepts the deal, impaling the witch and taking on her power.

Her first act is to restore her love Serah back to life.  But in true tragic fashion, Angela then has to send Serah away as she has no idea what these new dark powers will do to her.  Serah vows to find a way to bring Angela back.

The next part, Tom should probably handle because he like teaches books and stuff and me fail English which you would think is unpossible.  Alas, Serah continues on as a witch hunter and kills our man Marlowe who had made a deal with The Enchantress for immortality (and a lizard tongue, for her pleasure I guess).  Of course, Marlowe is based on a real playwright and over the years has even been rumored to have been Shakespeare himself.  In this version of the tale, Serah takes Marlowe’s magical blood and brings it to her friend “Will” who looks a lot like this guy:

Will is working on a new play entitled, “A Dream Of Midsummer Eve” (a title he’s “Not sure of”).  Serah tells him to use the ink made from Marlowe’s magical blood to write Angela’s story and to make her immortal.

One thought on “Jimmy Attempts To Read All Of Secret Wars 53 (What Year Is It? Edition)”