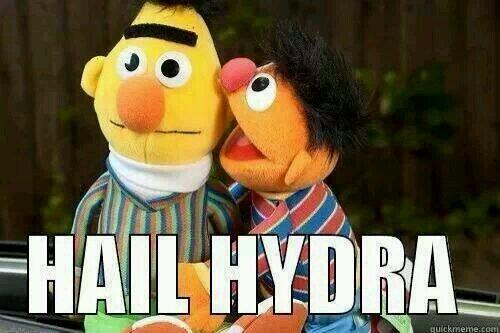 So apparently “Hail Hydra” is quite the meme.  Just do a quick image search on it.  Endless images of various people and characters saying it and one very pissed off Sam Jackson telling people to knock it off.

I missed this becoming a thing, but there it is.

It is also the biggest mover this week along with House of M.  That doesn’t mean they are great…just not as bad as they were last week.

After the break we’ll examine those series and also get Ryan and Tom’s thoughts on this weeks most overrated and underrated in the rankings.

Nothing new this week as I think we are done with any new Secret Wars books.  In fact, most of the upcoming issues are cluing each of the series up.  Which makes sense since the event was originally supposed to end this month.

But with the main series having faced long delays, and now an extra 9th issue being added meaning the series won’t end until December (!!), things might get a bit confusing.  You see, Marvel is still going ahead with their line wide, post Secret Wars relaunch in October…while Secret Wars will not be finished.  Marvel says the new books won’t spoil the end of Secret Wars, and we already knew that there was a Marvel Universe post Secret Wars, so that’s not really surprising.  But you have to think Marvel has been sweating this thing out a bit.

Tom:  The original Planet Hulk is one of the finest Hulk stories in recent years, and kicked off a great run of Hulk work from writer Greg Pak (continuing in the upcoming “Totally Awesome Hulk”).  The new one here is OK, and does feature a gladiator Steve Rogers, but aside from tossing around the terms “Warbound” and “Red King” it seems to have nothing to do with the original story.  That’s OK, but there are some better stories on this list than Planet Hulk, like Siege and Inhumans.

Jimmy:  This is one of my favorite books of the event…which I guess you can tell given they are my rankings.  The Gladiator Cap, Devil Dinosaur, the Killeseum, the mission from Doom and the hunt for Bucky.  I’m just really into this book.  It is smartly written with great art.

Siege is knocking on the door behind it, but time will tell what happens there as one of the few books that seem to be tied into the core title.  And even if Planet Hulk were to drop below Inhumans, it would still be in the top ten.

Tom:  Why is this one this high up here?  Because Ryan loved Blade the Duck?  These anthologies are only as good as the stories as a whole, and I wouldn’t elevate any one story based solely on one part.  Basically, after four issues, keeping this one this high for Blade the Duck means that seven-eighths of the series is being discounted.  Journal is no better or worse than the other anthologies.

Jimmy:  I’ll agree mostly with your comment on the anthologies.  While Ryan has loved them, I’ve mostly been negative towards them and I have the other two (Battleworld and Secret Love) in the bottom three.

In fairness, the Blade the Duck story (which was ok) was in Battleworld.  Journal has featured:

So, really, those middle two issues really pushed it up for me over the other similar books.  Outside of that Young Avengers story, I feel like the misses haven’t been as bad, and the hits have been higher than in the other anthologies. 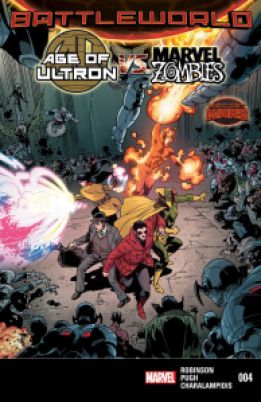 Ryan:  While I take issue with Squadron Supreme remaining unchanged after an AMAZING issue (I think it should take the #1 spot from Thors, at least temporarily), the biggest issue I have with this week’s rankings is that Age of Ultron v. Marvel Zombies finished its run and didn’t change rankings.  That book had been on the bubble for a while–it had promise but wasn’t living up to it.  Now the series is over and IT DID NOT DELIVER.  That last issue was rushed and made no sense.  Hank Pym from 1872-land has gone from adjusting the tension on springs to changing energy frequencies and modifying nanobots within minutes?  And he DOESN’T EVEN UNDERSTAND THE WORD ARTIFICIAL?  I liked the idea of this genius trapped in an older time but that’s just ludicrous.  And with an ending taken straight from Wreck-It Ralph, this series utterly failed on every level.  It should be at the bottom–at least below Journal and Battleworld because while not all of their stories work it’s still higher than this book’s 0% worked.  Way, way, way overranked.

Jimmy:  What can I say?  I have a process of ranking these and while I agree the last issue was weak and disappointing (and that Squadron Sinister was excellent), the whole series just floated in the mediocre to weak range.  And I try to rank them as a whole, not just on one issue, or the conclusion.  (As evident with the struggle to rank Captain Britain with it’s excellent issue and then poor issue run.)  It still has opportunity to move down, but I’m fine with it falling where it is.  Are you at least happy it is below Runaways?  🙂 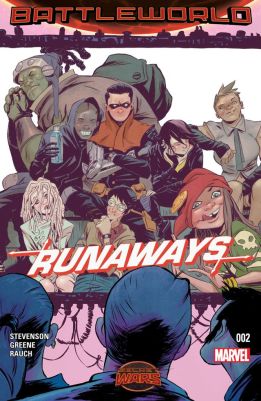 Tom:   Ryan is right.  This one may not have the same line-up (except for Molly) or creative team, but it is very much in the spirit of the original as it first appeared, where a group of teens learned their parents were supervillains and they made a run for it.  The kids’ parents included sorcerers, mutants, mafiosa, time travelers, and mad scientists.  This time around we have a group made up of alternate versions of different established heroes all from different zones who learn their school is training them to kill or die.  If one of the runaway group is a secret traitor, then they’ll be much closer to the original story, but its not necessary.  They got the spirit and the basic look right.

Jimmy:  Meh.  I’m sick of writing about Runaways.  It doesn’t appeal much to me.  Maybe if I had read Runaways previously and was all hoped up on spirit and tone juice like you and Ryan, I might appreaciate it more.  As it is, I find it totally average.

Tom: Civil War is really smart, and I like the way that its handling the different heroes, much better than Mark Millar did in the original mini-series.  Iron Man really does seem like the good guy here, truth be told.  Steve Rogers is way too into this fight.  Black Panther as the ultimate villain?  Makes sense.  Charles Soule (who apparently was a lawyer before he became a comics writer) really knows how to craft a smart book, and it shows.  Why couldn’t he have done the original story?

Jimmy:  My thoughts on Civil War have been all over the place.  Ranging from brilliant to mediocre.  There are so many logistical issues that if you stop and think about it, you will pull your hair out.  But at times it works quite well, and flipping it from simply a pissing match between Steve and Tony into something of a mystery has worked well.  It should probably be ahead last weeks favorite whipping boy Captain Britian, but I don’t know if I would put it in the same air as the likes of Future Imperfect and Infinity Gauntlet.  But truth be told, a stellar fourth issue could move it up there.